#TRI4ALL: Our 4 part series aiming to make triathlon more inclusive and accessible, for everyone.

The elephant in the room.

Go on admit it. Almost all of us have been at a triathlon and thought “oh wow, there is a black person”.

It’s not spoken about enough. But, excluding skintight Lycra, our sport has a distinct lack of colour.

In my 7 years coaching triathlon full-time I’ve completed over 1500 one-to-one swimming sessions, and I can remember every single lesson with a black person. Guess why? There have only been 5 of them. That is 1 in 300. Or 0.33%.

We reached out to British Triathlon to get some participation stats but unfortunately, they aren’t made public.

Some stats we could find:

So back to the title – do black people really sink?

While some historic studies did show differences in bone density and different levels of buoyancy, it is certainly not enough to stop someone from being able to swim.

Kenyan runners have been proven to have skinnier calves and longer achillies tendons than white runners, providing a much better rebound effect when running… but this doesn’t stop white people being able to run.

In fact, the statement ‘black people sink’ is massively harmful to encouraging people of ethnic minorities to get involved in swimming/triathlon. Would you want to try something that you had already been written off at?

Any experienced coach will tell you that the difference in buoyancy varies massively between people, all people, and the differences are far bigger within each race than they are between races.

Men are typically way less buoyant than females, and this can make it hard in the initial stages of learning to swim. But we don’t write men off as not being able to swim?

So, why do we have such a lack of diversity in swimming and triathlon…?

It’s a long chain of events that some people would probably rather ignore. But let’s keep it real:

But… Things are changing!

We are starting to see representation at the highest level.

So to dispell the myths, celebrate some awesome swimmers, and get people inspired, here are some of our favourite BAME swimmers:

This dude should probably have an article all to himself. Next time you are wondering whether black people sink, consider this:

The first female black athlete to win an Olympic swimming medal. She took bronze in the 100m and 200m Freestyle in 1976.

She controversially finished behind two East German athletes. Since then secret files have been discovered documenting the fact that all of the East German swimmers who finished ahead of Enith Brigitha had been systematically doped, without the knowledge or consent of them or their parents, as a matter of national policy, denying Enith the chance to be the first black swimmer to win Olympic gold.

After retiring from swimming Enith moved back to Curacao and opened her own swimming school where she taught children to swim.

From nearly drowning at a water park age 5… to Olympic Gold medalist!

Cullen has 2 Gold and 2 Silver Olympic medals to his name and is outspoken and passionate about bringing more diversity to the sport.

The first African-American woman to win an individual Olympic gold in swimming.

In Rio 2016 she had an epic final 25m surge to take joint first place.

Just watch the video above.

Seems she has kept herself busy, and on top of studying at Loughborough, she has recently co-founded The Black Swimming Association! (click HERE for details)

While Sam isn’t quite at the top level of the above swimmers we certainly think this video deserves a mention.

Watch it and we challenge you not be inspired.

Big shout out to Hoka for featuring this. It’d be great to see more brands doing similar.

WHAT CAN WE DO?

• Everyone having open and encouraging conversations on the subject 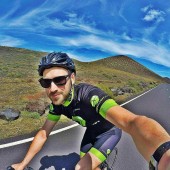 #TRI4ALL Part 1: IS TRIATHLON Just FOR THE WEALTHY?